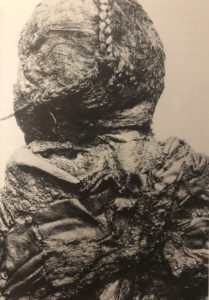 I saw my first bog person on the windswept, rocky West Coast of Sweden.  Inside the white walls of a candleabra-filled, Valhalla-like bastion where Swedish kings had duked it out with the Danes for hundreds of years, I stumbled on Bocksten man.

He died sometime in the Middle Ages. The first thing you notice is his hair—lush, curly red locks on a skull, preserved as in life. Like most bog people, he suffered a gruesome death. First, he was killed by a blow to the head. Then, a stake was driven through his heart. Then someone impaled him so he would stay at the bottom of the lake.Thats right, they had gone through the effort of impaling him with spikes so his body would stay at the bottom. The reconstructed wax model of him was the spitting image of Frodo Baggins—the hooded cloak, the sheathed dagger. His brown, hair-shirt cloak survived in perfect condition. He was about six foot one and probably thirty five years old when he met his ignominous end. The idea was clearly to double-kill him so he wouldn't come  back to life and haunt or take revenge on his killers.

You respect him more when you think about the lengths they went through to keep him down even after death. A massive piece of building timber juts out of his exposed ribcage. And that beautiful hair. I wanted to break through the glass case and run my fingers through it.

Poor Bocksten man. What did he do? Why go through all that? Was he some kind of witch and they were worried he was going to reanimate if they didn’t fasten that body down with spikes? If you had stumbled onto this scene, you would have asked: What exactly is going on here?

Bocksten man was discovered in 1936 by a Swedish scholar on his way to a midsummer party in the seaside village of Varberg. According to the Danish scholar P.V. Glob—whose name is so perfectly suited for his authorship of the seminal monograph The Bog People: Iron Age Man Preserved—he could have been a rabble-rouser killed by local peasants for trying to agitate against the Danish king. “The bog is the meeting point of four parishes and according to old beliefs he would not be able to escape from such a spot to revenge himself on his murderers,” Glob wrote.

After that I was hooked. In this time of Jamal Khashoggi, it is not hard to find oneself musing on the permeability of the human form. One day, you leave your wife and walk into the Saudi Embassy to deal with some bureacracy. Several hours later, you leave in the back of a black van, entirely reconstituted. Horrifying. Unconscionable. But real. Without the benefit of time travel or an Encino Man scenario, what other opportunity do we have to see a person from two thousand years ago in the full? For the body to survive almost totally intact over the centuries, tanned by bog acids, seems almost like a miracle of permeability. As the sweet, ever-sensitive and curious Glob wrote, “Death is the inescapable lot of man, and it comes in many guises. Among the Iron Age people from the peat bogs we have seen the signs of death in its grimmest forms… Yet these are the ones the bogs have preserved as individuals down to our own day, while all their relatives and contemporaries from the eight centuries of the Iron Age have totally vanished or at most only survive as skeletons in their graves.”

Bog people have been found across a broad swath of Northern Europe from 1450 to present. Many were discovered during the years of World War II, when the war-exhausted populations in Northern Europe were forced out into the bogs to cut peat for home fuel, like their ancestors from the Middle Ages.

Bog peoples hands and feet are delicate and smooth—they were unaccustomed to labor. The last meal found in their stomachs is often a specific combination of spring grains and seeds, lending support to the hypothesis that they’re sacrifices to spring. Many also have a special twisted noose tied around their necks, which serves no clear function.

The ancient historian Tacitus, in his writings on the Germanic tribes, suggested that bog people were human sacrifices. The victims were possibly chosen by drawing straws. He added that, according to Germanic law, “traitors and deserters are hung from trees; cowards, poor fighters, and notorious evil livers are plunged in the mud of marshes with a hurdle on their heads.” This theory was taken up and utilized for other purposes by nazi antiquarians.

The most stunning of all bog persons is Denmark’s Tollund Man—his perfectly marbleized form, his serenely sleeping face, his well-kempt fingers and toenails, the delicate bit of stubble on his chin, the perfectly preserved noose around his neck that was used to strangle him. Nothing compares to him in terms of sheer preservation of an ancient person—not Pompeii, not the Egyptian mummies. At 2,300 years old,  the bog acids have made his head the best preserved in the world.

I wasn’t necessarily seeking them out, but the bog people found me again in a dimly lit corner of Dublin’s National Museum.The Irish bog people were a different breed altogether. They were also around two thousand years old. But many had suffered unfortunate encounters with peat-cutting machinery or been otherwise decapitated or rearranged before their discovery. This has left them undefined and protoplasmic, chunks and sections of person, like grindhouse horror, or the thing coming out of the TV in that David Cronenberg movie.

Still, what is human is still discernible—Clonyclaven man’s flattened face is as immediately shocking and horrifying as coming upon a person who has just been hit by a car. You are hit with an immediate wave of empathy and worry for a fellow human. And that striking pile of beautiful red hair on his head, undying and ageless, not so different from our president’s. Researchers have found that he was wearing imported hair gel at the time of his death.

Old Croghan man too, reduced to just torso and arms. And yet, the arms are held out and flexing in a power pose of defiance—the skin is deflated and leathery, but you can make out all the strength that was there in life. There is even a lovely woven band wrapped around his left bicep.

I stood in the little altar-like nook with Clonyclaven man for a long time. Onlookers and children streamed past, each group shocked and awed. I felt like I was paying my respects to a dead relative. Reluctantly, indecisively, I exited the chamber and went to find my girlfriend. As soon as I left, I heard a little whisper over my shoulder. Thinking it was her, that she had gone in there and was looking for me, I went back into the prayer nook. It was empty aside from the man lying there in the glass case, mutely crying out, trying to send some message from across the millenia